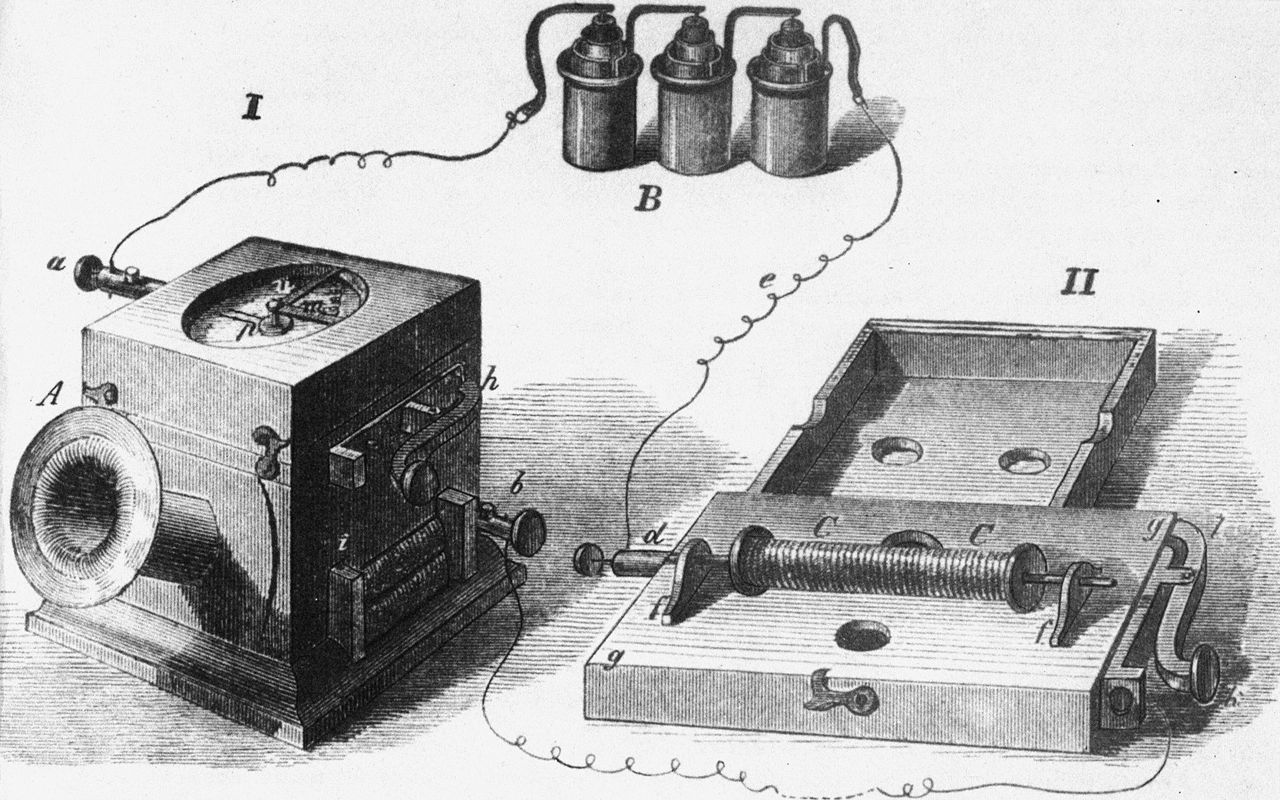 While electroacoustics is as old as lightning and thunder, man’s controlled application of it dates back to the 18th century. Early electroacoustic phenomena were mere replicas of the natural occurring ones; the crackles of electrostatic discharges in the early experiments in electricity. In 1729, it was discovered that some materials conducted electricity, and the idea that this could be used to transmit intelligence was born.

The first step towards today’s communication technology was the telegraph. Electrostatic telegraphs were demonstrated as early as 1774. Most of the telegraph ideas proposed to use one wire for each symbol to be transmitted, the first single-channel system proposed in 1774, where Tiberius Cavallo suggested to use the time interval between pulses to encode information.

With Volta’s discovery of the battery in 1800, and with the discovery (Or rediscovery. Gian Domenico Romagnosi observed in 1802 the deflection of a magnetic needle by a galvanic current. This discovery was only published in a local newspaper in Trent.) by Hans Christian Oersted that current in a wire produced a magnetic field, experiments with electromagnetic telegraphs began.

I will not dwell at the development of the telegraph, this story is found in Hunt (Electroacoustics, 1954) and other sources. Instead I will proceed to the invention of the telephone, which has contributed to a very large degree to the field of electroacoustics.

The history of the invention of the telephone is perhaps not as straightforward as most people might think, based on the most common knowledge. As has been the case with many major inventions, a number of people appear to have worked on the same problems more or less simultaneously, with limited or no knowledge about fellow experimenters’ work.

The history of the telephone is filled with patent lawsuits, but that is not the topic of this article.

Alexander Graham Bell is usually considered to be the inventor of the telephone, but there were several others tinkering with similar ideas several decades before him. Here is a short summary:

In 1854, Charles Bourseul published a memorandum in the Parisian journal l’Illustration, where he presented the first theoretical suggestion of a method for electrically transmitting the human voice electrically. Bourseul wrote:

Suppose that a man speaks near a movable disc sufficiently flexible to lose none of the vibrations of the voice; that this disc alternately makes and breaks the currents from a battery: you may have at a distance another disc which will simultaneously execute the same vibrations…. It is certain that, in a more or less distant future, speech will be transmitted by electricity. I have made experiments in this direction; they are delicate and demand time and patience, but the approximations obtained promise a favourable result.

With today’s knowledge, we realize that this “make and break” transmitting device reflected the insufficient understanding at the time of complex wave forms and how to transmit them, but his concept is basically that of the telephone. Bourseul himself did not develop the idea into a sucessful device, he may have inspired others to do so.

As early as 1856, we find that the Italian Antonio Meucci (1808-1899) claims to have invented a “telegrafo parlante” (talking telegraph). His description from 1857 (translated from Italian into English) reads:

The case of the German schoolteacher and inventor Johan Philipp Reis (1834-1874) is much clearer. In 1861 he demonstrated a device which he called “telephon”. Interestingly, he had constructed a transmitter (or microphone) along the same lines as that suggested by Borseul in 1854, the mode of operation being the interruption of current by a contact point attached to a diaphragm (the latter said to have been made from sausage skin!). More curiously, the receiver he employed was based on the principle of magnetostriction. As a proof of the shortcoming of Borseul’s idea, the current interruption type transmitter proved mostly incapable of conveying any other quality of sound than pitch, and largely fell short of transmitting intelligible speech. Eventually it would become clear that what was needed was a transmitter that was better able to transform sound into continuous variations in current or voltage, without interruption altogether.

The Italian inventor Innocenzo Vincenzo Bartolomeo Luigi Carlo Manzetti (1826–1877) reportedly invented a telephone device capable of transmitting intelligible speech around 1865, but the details of his invetions are missing.

To sum up, in the decades before Bell’s invention, a the idea of electrical transmission of speech and music was being developed into experimental devices by various inventors. How much influence they had on later work we don’t know. But we do know that Borseul’s idea of interrupted current is practically useless, and that a working telephone system would need to have a microphone that converted the sounds into continuously alternating current. A receiver would also be needed that could convert the feeble variations back into sound. In the next part, we will look into how this was accomplished, and how the telephone went from being a crude experimental device to becoming a major new technology.

All images were taken from Wikimedia Commons.

We are a Gemini-centre spanning the acoustics groups at SINTEF and NTNU, and we perform research on most things in acoustics.

Do you read Norwegian?

Write us an email